Selectman Joseph R. Pacheco is a lifelong Raynham, Massachusetts resident who is continuing a family tradition of public service that has extended over one hundred years and four generations. 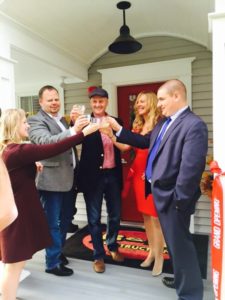 Joe understands the importance of long-term financial planning as well. Six months after his appointment as a Raynham Economic Development Commissioner, Joe joined the town’s Capital Planning Committee. From this post he worked with other town leaders to maintain quality services through prudent fiscal planning.

Considered a leading voice on municipal finances, Joe has continued his work to ensure taxpayer dollars are spent wisely. This work was recognized when in 2017 Joe led the towns effort in obtaining a bond rating increase from Moody’s to Aa3.

In 2007, Joe won 73% of the vote and was elected to his first term as Selectman. At age 21, he became the youngest selectman in Raynham history. Joe is presently serving in his sixth term and is Dean of the board by virtue of his status as being the longest tenured member.

As a member of a public safety family, Joe understands the crucial role safety and security plays in all of our lives. It was on Joe’s motion that Raynham adopted the fundamental speed law, another tool the police have in maintaining safe highways. And after twenty years of delays, it was Joe who worked with state and federal highway officials to re-construct the intersections of Route 138 and Interstate Route 495, one of the busiest and most accident prone interchanges in Southeastern Massachusetts.

Maintaining his early focus on economic development, Joe led negotiations that helped guarantee Johnson & Johnson chose to build its $20 million medical education facility in Raynham. This brought new jobs and additional tax revenue into Raynham. And as part of an effort to further expand commercial growth in Raynham, Joe led the effort of town and state officials to successfully obtain, and implement a $1 million MORE grant from the state’s Office of Housing & Economic Development. The state funding was used to rejuvenate Raynham Woods Commerce Park.

In honor of his efforts on behalf of Raynham, Joe was named a New England Business Bulletin “Top Young Professional Under 40” in 2009, and again in 2010.